East Clare is the perfect destination for those who wish to delve into our rich heritage. 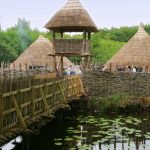 From monastic and ancient sites, to churches, cathedrals and abbeys, spanning over 8 centuries, you will be spoiled for choice! Or if you would prefer to meet the wonderful Bean a Tí at Bunratty Castle & Folk Park, marvel at the wild boar in Craggaunowen, or toast the Kings of Ireland at a Medieval Banquet, a world of choice awaits you …

Holy Island or Inis Cealtra – Holy Island on Lough Derg and the river Shannon is one of the most famous monastic sites in Ireland. Its many attractions include a well-preserved Round Tower, the ruins of six churches, a Holy Well, a unique graveyard with slabs dating from the eight century, Bullaun Stones, a cell like structure, which is one of the most extraordinary buildings in Ireland and a ‘bargaining’ stone where many a marriage was brokered. Their secluded position has enabled them to survive in a wonderful state of preservation.

Brian Ború’s Fort or Beal Ború, Killaloe  – Here lies the remains of a large ring fort which has long been identified as the ancient seat of Brian Boru, the most famous High King of Ireland. from 1002 until his death at the Battle of Clontarf in 1014. Beal Ború, as it is more commonly known, stands on a spur of land which commands the point where the lake narrows into the River Shannon. The High Kings headquarters was the nearby Kincora or  Ceann Coradh which is located one mile from here in the picturesque village of Killaloe.

St. Cronan’s Church, Tuamgraney – St Cronan’s 10th Century Church is the oldest church in continuous use in Ireland.  A Monastery was founded on this site in the 6th century by St Cronan.  Tuamgraney is one of the most notable and important ecclesiastical and historical places in Ireland.  It is mentioned in the Annals no fewer than thirty two times between 735 AD and 1582 AD. Brian Boru, High King of Ireland 1002-1014, is recorded as having repaired St Cronan’s church and its long disappeared round tower.    It is a rare surviving building with a recorded link to Brian Boru.  The doorway is considered a marvel of early Christian church architecture and features in many publications.  The eastern portion of the Church was added in the 12th Century and contains a number of features of interest from the Romanesque period. 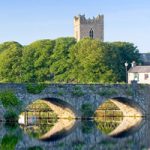 St. Flannan’s Cathedral, Killaloe – Early in the 12th century, Donal Mor O’Brien, founder of St Mary’s Cathedral in Limerick , built a church in Killaloe. Between 1195 and 1225 it was replaced by the present cathedral which was dedicated to St Flannan, an 8th century ancestor of Donal Mor. Its style is mainly Gothic but there are traces of earlier styles such as the rounded central arch of the east window which contrasts with the typical Gothic pointed arch. Built of yellow and purple sandstone the cathedral also contains windows and carved stones from earlier churches.

Quin Abbey, Quin– The village of Quin is a fine example of a medieval settlement consisting of an impressive fifteenth-century Franciscan friary built within the remains of an Anglo-Norman castle; a deserted village (now marked by grassy mounds), and across the river Rine a large thirteenth-century parish church dedicated to St Finghin. As the friary is so intact, it allows the visitor to enter the world of medieval Franciscans. The medieval stone high altar remains in its original position, and to the right of this are the very rare remains of an early seventeenth-century stucco crucifixion, on the wall above a tomb. The intimate cloister, the chapter room, kitchen, refectory and dormitories stand almost as they did at the time of the dissolution.